Before I get into this week’s comics, here’s what I thought of a few of last week’s that I read through. First, ACTION COMICS #41 – I’m feeling like this […]

Before I get into this week’s comics, here’s what I thought of a few of last week’s that I read through.

First, ACTION COMICS #41 – I’m feeling like this is sort of like one of those “nice try” scenarios. If this arc doesn’t go anywhere, I won’t be surprised. GREG PAK is rumored to be returning to HULK.

Oh, JUSTICE LEAGUE #41 – LEX LUTHOR’S armor is SUPERMAN-proof, not bulletproof? (Please be magical “DARKSEID bullets.”) Baddies can emerge from FLASH’S mouth? (Yes, that happens.) Think the JUSTICE LEAGUE–as a whole–seem insignificant in comparison to the focus on NEW GODS saving the universe? Yup, sounds about right for DC Comics in regards to their recent ideas for the “greatest” super hero team in history of comics. I’m not disappointed at all. This can’t be all on JOHNS. And where does this story fall in line with everything else that has occurred in DC’s zany canon. Despite my reservations about Part 1 of “THE DARKSEID WAR,” I still have high hopes. Who doesn’t love MISTER MIRACLE?

As for Marvel: Sunshine, rainbows, unicorns, and chocolate waterfalls of delicious chocolate. “A choca-river,” and all of that sweet stuff. I may be going a bit over the edge. But people, the SECRET WARS stuff is entertaining and comprehendable. (That word’s not real.) I’m enjoying it. Much like pizza rolls. Anyone dig pizza rolls anymore? Anyway, those Secret Wars books…

As for the tie-ins…

ARMOR WARS #1 – This book will be interesting. In this corner of Battleworld everyone has to wear armor or they’ll die. Or something like that. Maybe not one of the grandest out of last week’s tie-ins, but still solid. JAMES ROBINSON, y’all. He’s doing something way different than the other tie-ins I’ve read. Watch this book.

X-TINCTION AGENDA #1 – I loved the old-school XA, and this is shaping up to be a fun couple of issues. Take my money.

STAR WARS #6 and DARTH VADER #6 – For the first time we get interlocking stories. The spoilers are already available. Two huge events occur–all killer, and domesticated.

ALL-NEW X-MEN #41 – Both the ANX and UNCANNY finales screamed, “It’s almost over, guys. Gives thanks to Hollywood.” Such a shame. I know BENDIS had bigger plans. But now he has IRON MAN to retool. And I am so down with that. Did you know that Iron Man’s parents are THOMAS and MARTHA WAYNE? It’s totes true.

So yeah, that about does it for my thoughts on last week’s action. Now on to this week.

I love particular time-travel stories, i.e., BACK TO THE FUTURE. A week or so ago I woke up in the morning with the film’s main title blaring in my brain for reasons I can’t explain. So as I got ready to start my day I threw it on. Still plays, by the way. It’s the “Time Travel 101” story. When Marty ends up having to break into his own bedroom after entering “Timeline-2” was when 9-year old Matty crapped his pants. Oh no, he screwed up time. (pants.) 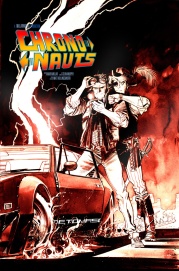 If you’re into doing awesome stuff in the past and want to see how jacked the future can get, then please read CHRONONAUTS. Issue four drops today. (The final issue! What?!) I’ve had the pleasure of reading it already. The future is still uncertain for CORBIN QUINN and DANNY REILLY, but what they’ve each been through so far is mind-bending. So many things have been wrecked in the past. I’m not sure how the present day hasn’t imploded. But MARK MILLAR is killing it. So is SEAN GORDON MURPHY. He attacks the senses with his art. I love that.

Unfortunately, a series I imagined to be ongoing isn’t. Issue four wraps up leaving me wanting so much more. But make this judgment for yourself. I highly suggest picking up this trade when it becomes available. This series needs to be ongoing, especially if this is a proposed film.

Descender is about TIM-21, one of the universe’s last robots. He is killed in issue two. What happens next is awesome.

Nameless is written by Grant Morrison. Did I mention that? (I know I did. I wrote that on purpose.) This book’s not ARMAGEDDON. It’s Armageddon on acid and death, but not Armageddon. Maybe 2001. Still trying to wrap my head around this. I’m enjoying CHRIS BURNHAM’S art. Loved his work with Morrison on BATMAN, INC. This is another book keep your eyes on.

The recent news from MARVEL of Secret Wars titles being pushed back is kind of rough. All that aside, I’m looking forward to WEIRDWORLD this week. JASON AARON is a can’t-miss read right now.

And then we come to BATMAN #41. I had the pleasure of reading this issue already. I may be hard on DC Comics. But it’s only because I love them. Any comic book fans do. If it wasn’t for the big bangers in the DCU, we wouldn’t have Marvel, etc. So when this new idea came across the pike, I was early to say, “What? This is Batman?”

Let’s face it. The “New 52” was a lot of weirdsauce and no flavor. There are kinks everywhere. I have been looking for something in the midst of all this (once again) change in the DCU and I think I’ve found it. Batman #41 is fire, fresh, and I’m already rooting on “the Commish.”

One reason I dig this issue so much is because it’s not something we’ve read before in Batman comics. Sure there have been other “Batmen.” JEAN-PAUL VALLEY comes to mind first. That was different and, depending on who you ask, neat-o. Of course BATTLE FOR THE COWL brought us DICK GRAYSON taking the helm as Bats and killing it. But now there’s a new contender. It’s common knowledge by now that JIM GORDON is the new Batman. I had trepidations about Gordon as “Robo-Bats,” or, “Iron-Bats.” But people, it’s going to work. (The new Bat-suit is dope. And nope, not the one you’re thinking of.)

We can’t doubt SCOTT SNYDER in the middle of all of this post-CONVERGENCE confusion. If anyone isn’t a little confused with what’s going on, I salute you and will be hitting you up every time comics confuse me from now until Eternia. But in all seriousity (that’s not a word either), if you haven’t been up to par with Batman books, jump on this action. Things aren’t what they seem and I’m so down to see what happens.

That is all I have, ladies and gents. Enjoy this Comic Book Wednesday. Again, there are some Secret Wars delays. In the middle of polishing this week’s blog I discovered a few books I expected for this week aren’t being released for a bit. Aside from that, I am so looking forward to reading and reporting for you all next week. Speaking of, a new DR. FATE series begins as well as VERTIGO’S MAD MAX FURY ROAD: FURIOSA beginning as well. Oh, and SQUADRON SINISTER! Those three books alone sound like a fun Wednesday.

Talk to you then. (Happy Birthday, Spence.)

Matt de Simone just wrote this blog. This week he got to read a few comics before Wednesday. He feels really cool about it. Tildy is unimpressed. The Phillies are bums. Follow him on the Twitter.