Skip to content
Five comic book super heroes are needed to save Earth from an alien armada of unknown origin. WHO WOULD YOU CHOOSE?
blogs

The close of my post last Wednesday sparked an idea. It’s a question you’ve asked your friends (if you all are comic book readers). Or maybe the query was triggered […]

The close of my post last Wednesday sparked an idea. It’s a question you’ve asked your friends (if you all are comic book readers). Or maybe the query was triggered after watching a series of the modern action film genre entirely inspired by comic books. One way or the other, nerds often wonder:

I’m not looking at this scenario like my team is entering the World Martial Arts Tournament. This is more of a team based on a common comic book scenario: There is an extraterrestrial threat on it’s way to Earth and could possibly be the harbinger of worldwide annihilation. Now I don’t want to go too deep into the backstory. All the villains are new, and were also dumb enough to broadcast a transmission forewarning Earth.

Tough decisions isn’t it? Sure, you can go for the power. One could also choose his or her team consisting of magic-folk. Oh, but the Gods, demigods, monsters… This may prove difficult. But I don’t want a team where each member can just fly up and punch out the baddies. (Or maybe just one.)

One thing that’s super important in formulating an awesome comic book team is covering all of your bases, prepare for anything and everything. With a team like the X-Men, not much thought needs to be brought into this situation. The X-teams are like a flea market when dealing with villains; it seems like there is two of everyone as far as power sets go. (Or multiple versions of heroes, depending on what X-book you’re reading.) But the Fantastic Four, for instance, they have a lot of bases covered, but not all of them. A powerful telepath can really work that squad over.

If this otherworldly threat is completely unknown, but shows their hand, you plan for what you see. You’re not sure of the incoming enemy’s line of attack or defense. So with only five heroes, I’m looking to kill a lot of birds with five stones. Also, I want a team that can prepare for a fight. I think I got this. Here’s my five:

INVINCIBLE – First, I need a heavy-hitter, a real banger. I will look no further than Invincible to fill that slot. On top of the Viltrumite strength, I’ll get the speed and regenerative abilities as well. That’s a killer package. Any readers of Invincible know exactly what Mark Grayson’s capable of. I would possibly order Mark to do a little reconnaissance to give us a better idea of what exactly is heading for Earth. Plus, he’s a pushover so he’d totally do it.

BEAST – Preparations are key. If I’m planning for an attack, I want a genius before a pile of weapons. Hank can at the very least gage the scenario if the team can get an eye or two far enough into space to see what the hell is coming for Earth. He’s also well versed in alien languages past and present. If this unknown entity speaks one of those languages, we have a translator. And I don’t know if you know, but Beast isn’t too shabby in the field of combat. If this alien force is unstoppable enough to where fighting is the only answer, Hank will be just fine–and probably come up with some dope weaponry/ship designs.

NICO MINURO – I have to admit, I’m not as familiar with The Runaways as I should be. (It’s another one of my comic book “to-dos.”) But from what I’ve read, if I need magic, I’ll look to Nico and The Staff of One. Having Beast around will help, as he and Nico will decide the specific spells to cast during an assuming battle. The Staff of One is unable to repeat spells–sort of like wishes granted by Shenron–so Hank’s strategic skill will come into play to enable Nico to cast the right spell. But it’s not all the Staff at work here. Nico herself doesn’t need the Staff to whip up some magics here and there. If I’m looking for major-league, armada-wrecking magic, then I’ll tell Nico to grab the Staff. 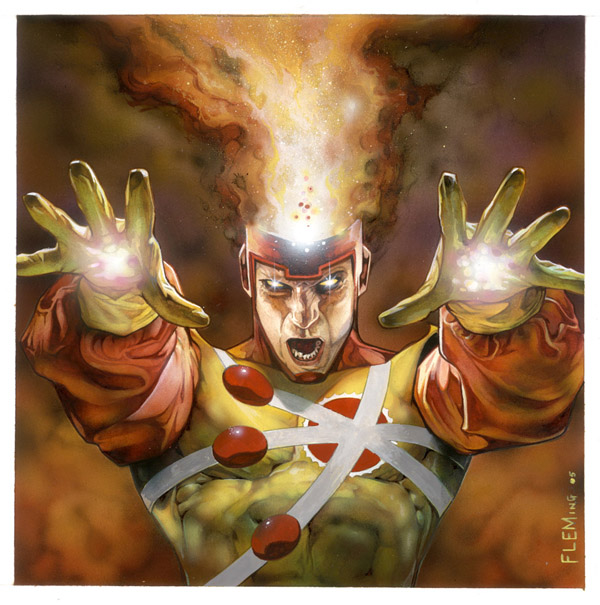 FIRESTORM – I need someone who can warp reality. Originally, I went with the X-Man Legion. But then I thought, “Dude, you don’t have any DC characters on your team.” So avoiding the clichés, I pushed aside your Anti-Monitors and Superboy Primes, and grabbed a character that first spoke to me during The Super Powers Team: Galactic Guardians ABC cartoon in 1985-86. Swap out the Wonder Twins for Cyborg and the fourth member of my team: Firestorm. I thought it was cool how Ronnie Raymond was a kid that could do this incredible stuff (like obliterating asteroids and phasing through anything) and he always sat ‘crisscross applesauce’ while floating in the war room. He was relaxed. Now, Firestorm can’t warp reality, but he can manipulate anything on a molecular level. Something tells me this type of power set would come in handy for any dire situation.

MADISON JEFFRIES – Finally, I need another big brain. (And a character that will make any of you non-deep cut readers say, “Who?”) But this level of intelligence and power is different than the sheer genius of Hank McCoy. Madison Jeffries is another manipulator; only he specializes in speaking and manipulating inorganic life (sometimes on an atomic level). He can control machines but also phase his body or mind into the machine and control it that way. This X-Man, or Utopian, is powerful enough to–for instance–take his hand, touch someone’s head, and map out a weapon design based on the idea in the person’s mind. If he an Beast work hard enough together, Earth is good to go.

Invincible, Firestorm, and Nico Minuro act as the muscle and magic.

Beast and Madison Jeffries stay on Earth and strategize.

It’s a pretty simple plan. I would read this book based on the synopsis alone: An unknown alien race is heading for Earth. Invincible, Firestorm, Nico Minuro, Beast, and Madison Jeffries must save the world.