Welcome to the new world. A place where one door has closed and endless doors await their respective key-masters. These doors straight ahead are closed, but may open for the few who hold the solutions. I’ve got solutions out the wazoo. It’s now up to me to find the doors I’m rambling about. It’s not like they’re going to show up at my doorstep. That would completely defeat the purpose of having doors. I’d open the door to my apartment, then there would be another door immediately waiting to be opened. Whoa. That’s kind of like life in general. Maybe we shouldn’t have doors to begin with. Well, then we could get into the whole “privacy” issue, but I’m done with all of this vagueness. 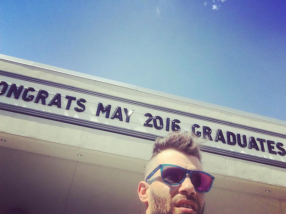 I graduated from Full Sail University with a B.F.A. in Creative Writing for Entertainment a week and a half ago. Cray-cray. I was also my specific degree program’s Valedictorian. That was unexpected. There were some stellar creators within the CWE program that I had the privilege of getting to know and collaborate with in my three years at Full Sail. I appreciate all the time they took to work with me and hope I see every single one of them down the road doing something creative. The chocolate frosting on the yellow cake was receiving the Advanced Achievement Award. There were votes. I’m humbled forever and ever.

So what does this all mean? Well, now I have new blanks on my resume that I made extra room for because I didn’t think I needed the room in the first place. Filled. I can apply to “big boy” jobs with fingers crossed and spirits soaring. Done and doing. Continue creative work on a super-special project with some friends I’ve met down here in sunny Florida. Crap, I have a deadline today. Oh, and then there’s the Guns N’ Roses show at the Citrus Bowl. Tickets purchased and safe. Meanwhile, maybe I might find some quick side copywriting down here locally. Next on the list.

I have somewhat of a plan, but it’s a plan. Metaphorically speaking, in terms of where I am as far as finding a job related to comics: I don’t think I could lead Xavier’s X-Men at the moment. However, I’m pretty sure I could handle the duties of leading Magneto’s fresh X-Men of the mid 80’s. That was fun team. I’m a fun guy. I party, but need a tuxedo t-shirt. I’ve always wanted one. I’m also from Virginia so cut me some slack. Long metaphor short, I’m uber-creative and have “The Guy” potential all day long. If I grind, I’ll win, eventually.

So I graduated. It’s set in. I’m moving forward. Not just with my professional/“I need to put my degree to use” future, but also with my fun future. You have to have fun. Period. Everyone does. If you don’t ever have fun, you’re not the type to read my blog anyway. Fun rules. If I don’t have fun doing something, I’m a grouchy-gills. So a few days ago, after a day dedicated to finally catching up on a month in a half of comic books, I reevaluated my “fun.”

And I came to you–to this place, my website. Writing and podcasting is fun for me. It doesn’t get any better than producing shit to throw on here–my little corner of the “internets” to entertain you. I appreciate you all. 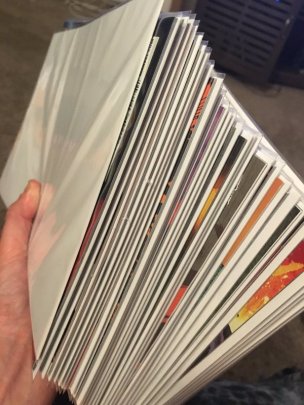 So here I am, back with the first written “Comic Book Wednesday” blog in forever. I changed the name to fit the brand (above). You have to do these things sometimes. I’ve felt over the past several months, since I managed to constantly stay a week or two behind on my reading, that it was reason enough to chill on my weekly comics commentary I started over a year ago. It was a dumb reason. Blogs are a stern discipline. It doesn’t take much, unless you have a lot to say. I’ve researched that blogs need to stay in and around 1,000 words to be effective. However, I was on the other end of the spectrum since the lull. I’ve forgotten a lot of the stuff I’ve read over the past nine months if that tells you anything. So I didn’t have a lot to say.

But comic books always build momentum, you just have to find it. Since I’ve blown through about 50+ comics, I see that both Marvel and DC are turning a corner. I’m pretty much caught up on my reading and ready to talk about it.

Off the top of my head, the standouts continue to be anything Image Comics publishes. Invincible is now coming out in consecutive months for the first time in forever (or at least that’s what it feels like). It got weird during the whole “Reboot” angle, but now I understand the “Why?” behind it all.

Citizen Jack is great. I thought Huck was a rushed but innovative story from Mark Millar. Speaking of, Jupiter’s Legacy 2 is about to drop. Jupiter’s Circle Vol. 2, the prequel to Legacy, is a groovy throwback to old super heroics and villainy. There’s heavy Darwyn Cooke (Rest In Power) influence in the layouts. Jeff Lemire’s Descender continues to shine. Image Comics be the bomb-bizzy.

I think I’m going to save my Superman commentary for a blog, as well as a podcast. Without getting wordy, Dan Jurgens, Peter Tomasi, and Max Landis may be rescuing DC’s greatest hero and asset. The past month in a half of all Supes’ titles (6) are worth reading, including Jurgens and Lee Weeks’ Superman: Lois and Clark and Landis’ Superman: American Alien miniseries. They’ve gone back to the “shield numbering” made famous in the 90’s. The last time they “went back” to that format was during the “New Krypton” stuff piloted by Geoff Johns at the turn of 2008 into 2009. Ironically, that was the last time Superman books were worth every cent you paid, in my opinion.

Marvel has also been pumping out some good action. Amazing Spider-Man is so good. He’s now become Earth’s Tony Stark and Stark has now become Peter Parker (not literally). If you don’t read Amazing currently, do it. The new volume’s first TP should be out. I also suggest reading Invincible Iron Man and International Iron Man as well. All three books work well together. I don’t know if this was the plan, but it’s working like a charm. Of course, Dan Slott and Brian Michael Bendis are the captains, so you can’t miss.

Much like Supes, I’m going to save my X-Men thoughts for a separate blog and/or podcast. “The Apocalypse War” is running wild. I currently read Uncanny X-Men, Extraordinary X-Men, Old Man Logan, and All-New Wolverine (which kills it). Two of the four don’t have anything to do with the current X-Men crossover. Needless to say, I’m kind of lost. Sort of.

Anyway–let’s look at today’s line-up for my purchase at A Comic Shop.

In all seriousness, Future Quest is the book I’m looking forward to reading the most out of this stack. Space Ghost, Jonny and Hadji, The Herculoids, and Birdman? Shut it up. I’m so there. I don’t even care what’s going on, I just want to see how Jeff Parker pulls this off. I guess you noticed a few of the “throwback” books this week. I’m actually about to read Madballs #1. Remember those? Let’s hope I can get to all of these in a week so I can come back and share my thoughts.

I hope everyone on Earth has a wonderful week. Thanks for taking the time out to read my babble. I’ll talk at you later.

Matt de Simone is a writer, podcast guy, and is getting really good at Mario Kart Wii. He also loves his cat Tildy ever so much a lot. She doesn’t like having her picture taken.