Skip to content
MattyLovesComics 05.10.2017: “The Return of Renato Jones”
blogs

Why, hello friends! I feel like the past months and a half flew by. Maybe it did. (It did.) I’m staying busy down here in sunny Orlando. The weather is starting to heat up. Last week, I planned on dropping a blog but I stayed out by the pool way too long. So long, in fact, that I had not seen that hue of red upon my skin in years. Seriously, I was afraid I really overdid it. Fortunately, the discomfort has subsided and I am now less “ah-peeling.”

[EDITOR’S NOTE:] Oh, you reached for that quip.

Sit tight, “Ed.” There’s plenty more where that came from.

As some of you may have noticed, articles I’ve written are popping up on the site. These stories are part of my work toward my journalism Master’s degree. (I graduate in Oct.) Expect to see more in the months to come. I’m now in the middle of figuring out my “thesis,” more-or-less. Wish me luck. Surprisingly enough, it’ll revolve around comic books. Somehow.

And speaking of comics, boy, have I been reading a lot. I often speak of my love for famed X-Men scribe, Chris Claremont. Up until a few weeks ago, I owned, but never read, Claremont’s introduction to Madripoor in the first Wolverine on-going volume (second, technically). Following The Fall of The Mutants, the X-Men were considered dead to everyone on Earth. A TV news station (maybe CNN, I can’t remember, look it up) broadcasted the “death” of the X-Men. The world witnessed it—in reality, the X-Men traveled through the Siege Perilous with help from Roma. The “dead” X-Men scattered all over the world (like Dragon Balls after a wish). Some of them couldn’t remember how they arrived in their new settings (See: Colossus and Callisto). Wolverine, however, was aware of where he’d been.

In Madripoor, to help conceal his identity—no thanks to an encounter with a few nasties including the likes of Roughhouse—Wolverine adopted an eye patch. The locals gave him the nickname “Patch,” so, Logan naturally went with it. I know you’re asking yourself, “How could they NOT tell that “Patch” is actually Wolverine.” Simple. Back then (1988), Wolverine still wasn’t a household name. Not a lot of characters outside of the X-Men universe saw Wolverine without his mask. Besides, the X-Men always used their psychics to create a blur when photographed or videotaped. Trust me, it works.

Since the book’s release, Madripoor Nights had been on my radar. This collection consists of Marvel Comics Presents #1-10, Marvel Age Annual #4, and Wolverine (1988) #1-16. I loved MCP as a kid. That title, as well as Marvel Tales, were essential to me getting a grasp on the Marvel Universe as a kid. MCP usually consisted of three to four 6-10 page stories featuring characters that were: popular, but not enough for their own book, or, unknown characters that needed fleshing out (like Devil-Slayer). Claremont’s Save The Tiger was the set-up for Wolverine’s first ongoing series. In a way, MCP became Wolverine’s “2nd” ongoing series. After the Save The Tiger run, Wolverine would return to the book around issue #39—which is in and around the time I started flipping through comic books in general.

Madripoor is my favorite “fake” city in all of comic books. I find it unfortunate that none of the Wolverine films take place in the most dangerous city in all of Marvel—yes, worse than Hell’s Kitchen. For a better glimpse of “Lowtown,” check out Madripoor Nights. It’s essential Wolverine reading, and no one writes Wolverine better than Claremont—well, Morrison’s is good, but y’know what I mean. It’s not the definitive Wolverine—but it’s a great story. 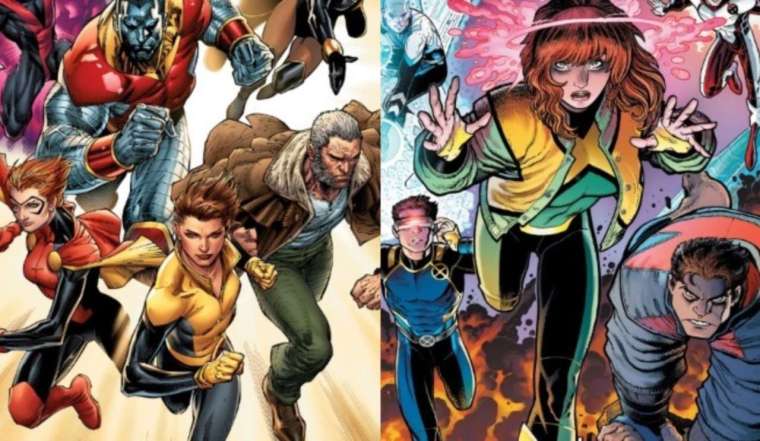 Since I’m on the subject of X-Men, I’ve been super-happy with X-Men Gold and X-Men Blue. I had my druthers about ResurreXion—I’m still not sure if it’s an event, or—yeah, I dunno. Gold already made waves within the comic book community for all of the wrong reasons, but the story itself is excellent. It’s basically a three-part ruse. Kitty Pryde is well-established as the leader. “Old Man Logan” doesn’t evoke eye rolls. Mesmero returns. It’s fun! For my money, this first story feels like a filler story from Uncanny X-Men’s heyday in the early 80’s.

X-Men Blue is pretty neat as well. The out-of-time, “All-New X-Men” are working out of (where else?) Madripoor. Jean Grey is running the show—not sure how I feel about that with Cyclops playing second fiddle. Cyclops should be the leader. That’s like making Duke from G.I. Joe a grunt. It wouldn’t work. So, I’m interested how long Cyclops will play the wall before he either steps up, or dies. Another interesting caveat to this title is Magneto playing the role of “Professor X” once again. That usually doesn’t end well.

I’ve also read Jean Grey #1, which came out last Wednesday. After one issue, I see what Dennis Hopeless is doing with the character. Hey, it’s tough to be Jean. The previews of the next few solicits see characters like Prestige (Rachel Summers), Hope Summers, and Quentin Quire appearing in the book. It’s no secret what ties all these characters together. With the recent goings on in books like Mighty Thor and Thanos, the Phoenix is soon returning to the forefront of the Marvel Universe. I hope whomever it is that decides the Phoenix’s fate knows that the entity isn’t about “Death and Destruction.” The Phoenix is all about “Birth and Rebirth.” With Marvel Legacy rumored to be Marvel’s “DC Rebirth,” it would make sense if the Phoenix is partially responsible for reshaping the entirety of the Marvel comic book universe.

Ah, with all of this talk about some of the things I’ve read recently, let’s take a look ahead at what’s on the docket for today.

When I visited Star Wars Celebration weekend, I attended the Marvel Comics panel which featured Charles Soule and Phil Noto. One of the comics they introduced was Star Wars: The Screaming Citadel. They sold it to the crowd as a Star Wars horror comic—an interesting concept. I’m also excited to read this series because it crosses over the Star Wars ongoing title written by Jason Aaron and the Doctor Aphra series written by Kieron Gillen—who writes the Screaming Citadel one-shot. This is the second time Marvel has given the Star Wars comics a crossover event (see: Vader Down). I thought the first one was a successful adventure. Let’s hope Screaming Citadel is a freak show.

Oh, man. Renato Jones: The One% is my favorite series from 2016. Season Two begins today and I’m super-stoked. If you’re a rich scumbag doing stereotypical “rich scumbag” things, Renato Jones will find you at the worst possible time, and then he’ll likely kill you with his sick knife-gun thing. Kaare Andrews’s landscape is a perfect fit for this style of storytelling. The world of Renato Jones is not nice. He’s not necessarily a “good guy.” There are no white hats worn. He’s like the Punisher—but he starts “inside” because, in reality, Jones is a one-percenter much like his victims, and not a war-torn psycho hell bent on seeking vengeance for everything. Check it out.

Two of the steadiest comics in the game currently are Action Comics/all Supes titles and Amazing Spider-Man. Dan Slott’s run on Amazing is like retaining a Netflix/Amazon Prime/WWE Network/CHIKARAtopia subscription. It just rolls over. You don’t think about it, but every month, there it is. No questions asked. These services are a part of life for people in 2017. Slott’s Spidey is the definitive Spider-Man, and thus, a part of my life. He’s taken all of the stories from the past and managed to find a place for them in this age of comics. Sure, some people aren’t a fan of Slott personally, but that shouldn’t discredit the thread, or, web he’s weaved over all of these years.

The current state of Amazing is as good as it has ever been, in my opinion. I love the Green Goblin. Since the Dark Reign/Siege storyline, we haven’t seen a lot of “Normie” for several years. Leave it to Slott to build up to Osborn returning to make Spidey’s life miserable. Where’s Norman Osborn been? Oh, just leading an Eastern European nation. Where else? Like we really know how many countries have popped up in Eastern Europe for the past 20 years. Silver Sable also just recently returned for the “dead.” I’m usually cool with a “dead is dead” policy, but if a character is returning that I like, I don’t have a problem with it.

Write to you soon.