Happy New Year! Oh, my goodness, I know! Where the crap has my blog and my podcast been? Well, I needed rejuvenation. Getting a Master’s degree drained me. It didn’t […]

Happy New Year! Oh, my goodness, I know! Where the crap has my blog and my podcast been? Well, I needed rejuvenation. Getting a Master’s degree drained me. It didn’t defeat me, but writing about the comic book industry from a retail and an entertainment prospective wore me out. As in, I didn’t pick up a comic book until two days prior to my flight out of Sanford-Orlando International Airport into the mountainous change of pace known as Blue Ridge, Virginia. Two months before, I couldn’t read another comic book kind of like a National Wing Champion would rather not see a Hooters following yet another successful bingeing contest. Or not. I don’t know any binge-eating contestants.

To be honest, I didn’t feel right the near-two months prior to picking up Action Comics #989. Gee, I wonder why? There’s something about my brain and it’s connection to comic books. I’m so fortunate I have something like this. It’s hard to explain, so, I won’t attempt to do so. Obviously, readers and listeners of the MattyLoves content understand that I dig the comic book medium. If this is your first experience, comic books are one of my “things.” I love them, and at the end of the day, they love me too.

I feel that for the past few years, I’ve shared my favorite comic books of the prior year. (Not sure why I used “feel” instead of “know” there.) Comic books in 2017 were more of a study than an escape—which is comics’ usual function for me. Although I enjoyed a lot titles for much of the year, stand-by’s like X-Men comics, a lot of the “Year Two” DC Rebirth stuff I read, the overload of Star Wars content, and a couple of my monthly indie titles from Image kind of went off the rails for my taste. Maybe it was just me and the impossible results I want in my X-Men books. Perhaps Marvel’s dozens of Star Wars titles now get on my nerves. I might have desired more of a connection to the amazing Rebirth one-shots from 2016. It could have been that I spent too much money on books that didn’t tug at my heartstrings.

The latter is an obvious excuse for any reader. Let’s set that aside.

A few weeks ago, we all found out that Disney plans to purchase 21st Century Fox. The long and short of it—as it pertains to comic geeks—is Marvel Comics falls under Disney’s banner. If FOX does the same, my distain for what Marvel’s X-Men decisions will possibly be all but a memory. Screw you, comic book cinephiles! I’m not worried about an AvX movie because Marvel Studios is out of ideas for the next Avengers films. The comic books—the source material—are what concerns me. It’s time for the X-Men to go back on top of the card. With what Marvel is previewing for next year’s major stories, Wolverine’s back—the real one, not the Old one. Professor X is back as well for all those who are still enduring Astonishing X-Men. (It’s cool, I am too.) Jean Grey, yes, that one, has also risen from the ashes (again). If Scott Summers returns, it is on. I don’t know what they can do that they haven’t done already, but totally nullifying the last decade of books is a start. Do it for me, Marvel.

Instead of trudging through all the DC Rebirth books with one eye open, I dropped Batman, Flash, Wonder Woman, Titans, Aquaman, Hal Jordan and the Green Lantern Corps, Green Lanterns, Nightwing, and I know I’m missing one or two others. With all the awesomeness that a possibility of a Watchmen closure presented, DC basically only wrote two or three more single issues of Bats and Flash books tying into the initial Rebirth #1 epic. Patience is a virtue and so is Superman. If DC Comics did one thing 100% right since the whole Rebirth status quo flip, it’s the fact that Superman is “the Man” once again. Doomsday Clock is nice and we’ll get our answers soon enough. Not sure how Clark will fare one-on-one with Dr. Manhattan, or, how Geoff Johns pulls that off. This past year of major titles was a head-scratcher. Please, keep Superman “right.”

Anyone see The Last Jedi? [raspberry] Nooo. No fart noises. I jest. Watch it more than one time in the theater and I feel you’ll change your initial opinions. The Force Awakens only awakened more flaws during each replay after the initial high of there being a new Star Wars story continuing the original epic. TLJ is actually way more fun the second time around. There’s beautiful space-stuff. (The TLJ Blu-ray should use my previous statement.)

Getting back to that initial high of the new Star Wars films. I felt similar once Marvel announced that new SW comic books would be rolling in to, more or less, help build the hype. Jason Aaron’s Star Wars run is some of the best SW content I’ve ever experienced. Kieron Gillen’s Darth Vader: top notch. That was then. Since those two titles premiered, holy crap, have there been a lot of Star Wars comics from Marvel. They’re hitting all eras too: Old Republic, The Clone Wars, what happened between A New Hope and Empire, what happened the second after Revenge of the Sith closed… it’s all there. But what it is too much? 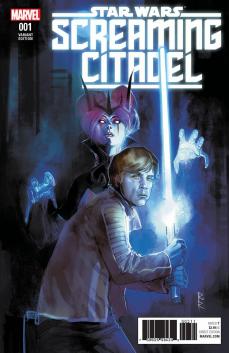 Hey, I’m not a huge Star Wars fan. Sure, I went to Celebration Weekend, but I also live right outside of Orlando, Florida. Duh, I’m a nerd. I’m going to that piece. I love the films and the two aforementioned SW titles Marvel dropped a couple of years ago, but Aaron and Gillen both moved away from the SW comics and onto other projects related or unrelated to Marvel’s ongoing Star Wars titles. I’m a fan of writers just as much I am a fan of comic book heroes and villains. Sometimes, I like a brand of stories that vibe. The writers churn the engine/vibe. We, the readers, are the cogs. Massive engines can run just fine missing a cog or two. I still have my eye on what Marvel’s doing with the SW titles, but I’m saving my money. The Screaming Citadel really fell flat for me. I would rather get burned on another brand of books. I want Star Wars to remain as untarnished as possible, though some would argue, “Too late, Matty.”

Now that I’m currently catching up on my comic books, television and film also sort of took a back seat as I finished my graduate program. I know that earlier last year I praised FX’s Legion series as being the best comic book-related show ever produced. With the recent shake-ups at FOX, I’m not sure if we’ll get a second season any time soon… and I may be totally cool with that. I’ve read reports of the production. The guy cast as Shadow King left the show. Since the middle of 2017, I haven’t seen a lot of news on the new season. “Early 2018” was the initial projection of when we’ll get new Legion, but I’m not so sure. Good shows can still survive after over a year-plus layoff. Granted, Legion is a different animal in comparison to your Curb Your Enthusiasms and well, the current greatest show on the planet: Game of Thrones.

My love for all-things Westeros is a love that I feel way hypocritical about. Hear me out. I bitch constantly that comic book movies barely reflecting or tipping the cap to the comic books that built the mythos and legends. I’ve read A Song of Ice & Fire: A Game of Thrones and that’s it. I think the show is perfection, but I know there are “Matty’s” out there who’ve read all the series to this point and have major issues with the direction of the show. Whatever. The books are so long and admittedly, I’m not a big fantasy-guy when it comes to prose. For Christmas, I received The World of Ice & Fire: The Untold History of Westeros and the Game of Thrones, which is basically a Secret Files and Origins for GoT. I’m not sure of the next GoT content’s status without looking it up (by the way, season eight doesn’t premiere until 2019). I know some sort of animated gimmick is on the way. I’m just glad that when I caught up on GoT, I ran through seasons three through current in about three weeks. Then I started watching it again. I think that’s the norm for most fans. 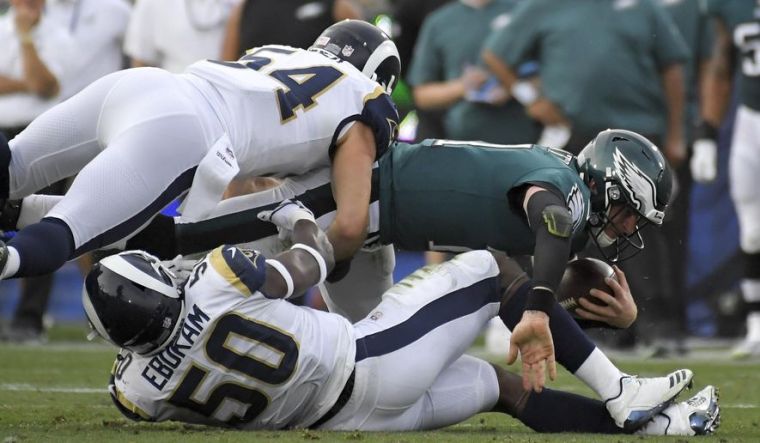 Lastly, during this amazing season the Philadelphia Eagles put together, my love for Carson Wentz grew into pseudo-obsession. I began amassing his rookie cards. Yes, f###in’ football cards. I’m not going to disclose the amount of money I’ve spend on Wentz rookies and most certainly won’t disclose how much I’ve spent on cards in general from August to December in 2017. The only thing that puts my mind at ease is the fact that I am now selling stuff—like those cards I don’t want but have value—on eBay. Why I never did this before, your guess is as good as mine. I’m having fun doing so and that’s what’s important.

I feel good, guys. Jotting all of this down was something I really needed to do. I appreciate everyone’s support over this past year and I promise to make it up to you all! Keep your eyes peeled as I am currently brainstorming new ideas and content for MattyLoves. The podcast’s return is next. It’s always difficult to schedule recordings during the holiday season. Now that the year has turned, it’s time to talk about stuff again. Stay tuned and enjoy 2018!

Matt de Simone is a journalist who loves comic books, pro-wrestling, and Philadelphia sports. Following him on Twitter, Instagram, and check out his podcast today!