This week’s “Waryah” Wednesday features a promotional interview with The Ultimate Warrior and Don Muraco. Regional wrestling promotions used this method of advertising to bring people to the arenas and armories. Jim Crockett Promotions utilized their talent to promote events better than anyone. However, the end of 1988 soon brought an end to WWF using an interviewer like “Mean” Gene Okerlund or Craig DeGeorge to question the interviewee. As this series of blogs progress, you’ll see the green screen come into effect in the fall of 1988.

My introduction to Don Muraco came via the Wrestlemania IV double-VHS rental. Basically, after “Superstar” Billy Graham suffered a career-ending injury, “Rock” took over the “Superstar” role with Graham as his second. He swelled up and, I think, did a better job than Graham could’ve done at that point in the twilight of Graham’s career.

Wrestling fans knew Rock was tough. Warrior, the new kid on the block, would naturally be a solid tag team partner for Muraco in 1988. If I had the booking calendar that spring, I would have this “Ultimate Team” tag from Jan-Feb, then turn Rock on Warrior to go into Mania IV at an early February TV taping. Next, supplement Hercules into the World Championship Tournament. Add another guarantee from Bobby Heenan that his man (Herc) would lay down for DiBiase (like Andre), and then whatever complications from Herc’s disappointing showing in the tourney would’ve naturally phased into the “slave” angle later that year. What could have been. Warrior and Rock would’ve produced the same match quality. Just watch a Muraco match followed by one from Hercules. They Irish whip the same way and it still drives me crazy.

Anyway, Muraco and Warrior promote a match that took place on February 22, 1988 at Madison Square Garden. The match was originally billed for Butch Reed and The One Man Gang to be the opponents, but King Kong Bundy became the substitute for Gang on the night of the event. So, that information impairs this promo, but it’s still great.

I think this interview starts in the middle of Don Muraco addressing the match.

Look at these guys. Muraco’s quick to state the obvious for any wrestler who’s never teamed with The Ultimate Warrior. “…fact is, he IS The Ultimate Warrior and as my partner we are ‘The ULTIMATE TEAM.’ Ain’t that right, big man?” Yes, indeed they are the first “Ultimate Team.” I’m not certain, but as this blog series progresses I bet we discover another WWF Superstar first teaming with Warrior that refers to them as “The Ultimate Team” like Muraco. It’s not a reach, but in this case, it works.

Did any of you ever get into “E-Wrestling” in the late 90’s when the internet was just a wee babe and America Online was king? E-Wrestling,­ as it was and surely still is, was a role playing, text-based league comprised of a group of users that each made up a wrestler from appearance to backstory and “applied” to an E-Wrestling “company.” It was up to the league’s owner/commissioner to decide to hire. You could sit in one of the WWF chat rooms on AOL, watch the e-wrestling links, and/or find a way to send a private message to the owner of a league.

Once you were in, then the fun began. No one was writing screenplays (yet). It was all about the colors and font sizes. Not to mention the length of the RP posts. Early on, it was based around emails. CC’d to high heaven. Then, owners eventually would have a Geocities page where users could post on message boards and that was also where the weekly shows were posted. Later came the e-wrestling brands affiliated under one banner. Of course it soon became mad confusing (and political). That was all inside of four or five years too.

The reason I’m wondering about the relevance of E-Wrestling today is due to the fact that this interview here is 100% E-Wrestling gold. I know I was kicking out this kind of dialogue in my early E-Wrestling days as a 14-year old. Only difference was my characters were made up. I hated leagues that let users control real wrestlers.

But enough of that, let’s get into what’s The Ultimate Warrior has to say about this match. Does he show any fear? Nope. “AAAARGH! The Ultimate Warrior! Because, you see, One Man Gang,” he says, “there was a time a when you walked the streets of Chicago and you didn’t need no friends and you didn’t need no partners!” You can really hear Jim Helwig’s “Georgian draw” in some of his early promo work.

“Well, brother, I walked along all the other warriors! I walked on ‘em until they was six foot under,” he continues. Now we’re starting to hear the first bits of “Warrior-Speech”—when Ultimate Warrior talks about where he was before his arrival in the WWF. “And you can look into the eyes of this Ultimate Warrior! And you can see a fire, brother! I’ve walked through the land and I’ve crossed over many men!”

Another thing this promo presents is one of there are a couple of key elements when digesting an Ultimate Warrior interview.

1. The Four Stages of the Waryah – From 1988-92, there is the Pre-IC title Warrior—when he’s figuring shit out. Then you have IC Champ-Warrior—a sudden boost in confidence and mythos as we learn what happened to Warrior in Parts Unknown. Next is the World Champion Warrior—benevolent and all the kids’ new hero. And finally, the Post-World title-Warrior & beyond—when “Macho King” Randy Savage steals part of Ultimate Warrior’s soul and Warrior’s never the same (more on that down the road).

2. The “Poison” – Warrior becomes infatuated with exclaiming that he’s injecting himself with “poison.” There are good poisons and bad poisons. The irony here and the psychological take is interesting. However, he doesn’t rant about that subject for a while. Just keep an eye out.

3. The facepaint stages – You have the classic design shown in this early interview. Then, he begins to outline the classic design with black or other dark colors as well and filling in the middle with black, or, other dark colors. Next the ’89 neon Warrior paint that add more lines or shapes. I personally am a fan of the neon green, pink, and yellow. The “World Champion paint” started to get more intricate, but then went away from the norm and produced a corporate-issued, streamlined symbol “tattooed” on the cheeks of the Warrior so he could appear more accessible visually. The mystique was a bit lost. Finally, there’s the “Monet” era where his classic paint became highlighted in dots, lines, and shapes. It probably took longer to put on the paint than it did to tape an entire month of WWF television.

4. Re-watchability – Lastly, most Warrior promos you must watch twice, at the very least. Especially, when Warrior has other people in his promo with him. You first watch to listen to what Warrior and his partner have to say. Then go back and watch Warrior’s partner’s reaction to whatever comes out of Warrior’s brain. The Survivor Series promos are particularly good, but again, we’re months away from those.

For this particular promo, we see Don Muraco immediately turn from the camera after Ultimate Warrior talks about crossing over many men. I believe one of two things happened: Muraco almost laughed because of Warrior’s nonsense, or, someone off-camera reacted in a way that nearly set off Rock—who was known for breaking character in interviews from time to time. Either way, be on the look-out for this in the future. Some of these reactions to “Warrior’s wisdom” are priceless.

Back to this interview. So, last week we heard Warrior talk about “jumping” on his back as what he weighs. Warrior’s back at it again this week because he probably cut the promo from last week minutes before this one based on his appearance. Warrior continues, “And One Man Gang and Butch Reed… BUTCH REED! Jump on this back, brother! Jump on that back and you’re gonna go down! Me and ‘The Rock’ Don Muraco: 600 pounds of ULTIMATE MASS! With ULTIMATE DESTRUCTION! Power, brother, and you know it!”

Now we officially know that these two fellas are big guys, which is rather redundant. We get it, Warrior. Muraco finds a place to chime in stating that, “This man (Ultimate Warrior) could bench press a condominium if he wants! Ooooh yeah! We’re ready, baby!” I would say that pretty much sells the match. “Matt de Simone, Age 8” would want to see Warrior bench press the One Man Gang in Madison Square Garden.

I want to take a minute to thank everyone for the birthday pleasantries yesterday—one of the perks of social media. So, thank you again.

NEXT WEEK: “Mean” Gene puts over Ultimate Warrior huge on the cusp of Warrior finding his footing. The interview features an explanation of how he became the Ultimate Warrior right before his feud with The Mighty Hercules begins prior to Wrestlemania IV. See you all then! 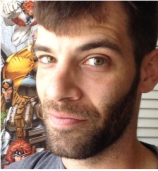 Matt de Simone is a writer, podcast host, and pro-wrestling fan. Follow him on Twitter, Instagram, and check out a few old episodes on his soon-to-be-returning podcast. For a preview of what’s to come, visit Rocket Fuel’s channel on YouTube for more Warrior madness.