10.17.2018 What’s shaking, “Waryahs?” I’m back again this week to continue the analysis of The Ultimate Warrior’s promos and interviews during his heyday in the then-World Wrestling Federation. As I’ve […]

What’s shaking, “Waryahs?” I’m back again this week to continue the analysis of The Ultimate Warrior’s promos and interviews during his heyday in the then-World Wrestling Federation.

As I’ve shown you thus far, Warrior was all about pumping himself up in his early work. “The Philosophy of The Ultimate Warrior” had yet to slip through the creative cracks. That would soon change during the build to Wrestlemania IV. Last week we saw the first shots fired in the feud between Warrior and The Mighty Hercules. Today, Warrior opens the doorways to his kingdom of madness and informs Hercules that not only are they great opponents, but, apparently, Hercules is about to take a trip to “The Darkness.” More on that below.

The more I watch these interview segments, the more I miss this style of reporting. Instead of WWE running the card over the Titantron, why can’t WWE have a month where we get to see Renee Young or Mauro Ranallo report from the “WWE Network Event Center?” Just use it weekly to build up everything from RAW to SmackDown to NXT. Call me crazy, but they could also take a minute to promote live events across the country for that month. Use it during commercial breaks at live events. It couldn’t hurt. 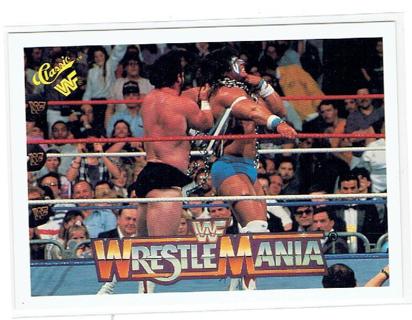 Anyway, the lead-in here comes from “Mean” Gene Okerlund, who’s in the middle of reporting about the upcoming match between Warrior and Herc at Wrestlemania IV. Okerlund says, “Hercules—obviously a very strong individual. I hope he does not underestimate his opponent, this man: The Ultimate Warrior.”

As we cut to Warrior, notice that his facepaint looks a bit different here. Previously, we’ve seen Warrior with out any color around his eyes. This variation is still under the “Classic Warrior” stage of facepaint, but he’s beginning to tweak the patterns. It’s a simple light blue and red, but it works hiding Warrior’s face more so than previous patterns. This paint has a more matte appearance. It’s a bit crude yet effective.

The following promo is a prime example of the style of promo non-wrestling fans thought they would see if they tuned into pro-wrestling in the early 90’s. Pro-wrestling already had it’s “screamers” (Flair, Funk, King Curtis, Hulkster, etc.). Ultimate Warrior brought a new aspect to the yelling game. He looked like a super hero and sounded like an animal. “AAAAAAH—HERCULES! You felt the power!” Warrior exclaims, “You felt the power that makes the SKIES RUMBLE AND THE EARTH SHAKE! Hercules, at Wrestlemania IV, all you have to bring is anger and frustration. I LIVE FOR A GOOD FRUSTRATION! ‘COMBAT’ IS WHERE WE’LL BE! WRESTLEMANIA FOOOUUURRR!!”

That shit is so awesome. It is “Pro-Wrestling 1988” at its finest. The “frustration” line is definitely one of his top-tier all-time quotes, in my opinion. He also mentions “Combat”—that’s where he and Herc will be at Mania, apparently. By the way folks, Warrior’s not talking about combat in the “normal” sense of its definition. He isn’t Normal (which we will soon get into below). Combat is a city within a different plane of existence: The Realm of the Warrior, or, The Waryah Realm.

What do I mean? Well, the next week’s promo presents a further look into what I’m about to describe.

In this promo for Wrestlemania IV, Warrior sends out an invitation to The Mighty Hercules.

Call me a conspiracy theorist, but I think Warrior’s reached one of the first steps in giving the viewers something to think about. Let’s break down the quote, “The Heavens have opened up from above… step into the Darkness.” We—“The Warriors”/his biggest fans—look down from above as Ultimate Warrior pulls his opponents into The Darkness within the boundaries of Parts Unknown.

Warrior’s opponents better have good instincts because it is there where Warrior is at full power. As I mentioned above, Combat is the city in Parts Unknown where Warrior has built a fortress. The structure consists of the constructs of his fallen opponents consumed by The Darkness. It’s not composed of a pile of dead bodies, but the personas they once laid claim to. Over the years, Giants, Immortals, Perfectionists, Geniuses, and even Elvis Impersonators were some of the many constructs interwoven to for Warrior’s Castle of Power. Maybe for a lifetime, or maybe for just one night—either way, if you fell to the Warrior, he took part of you with him back to Parts Unknown. Into The Darkness, where a piece of you would forever exist with the rest of the fallen. You can only survive on your instincts, which is pretty reckless.

I have a decent imagination. This all makes sense, right? The point of this blog series is to debunk the popular opinion that Ultimate Warrior’s interview were incoherent. What I’m saying is that there’s a reason Warrior opens up about The Darkness—because it’s effin’ real. If you don’t start to believe me now, you will later. Trust me.

Wrestlemania IV took place on took place on March 27, 1988. The marquee match-up was Hulk Hogan and Andre the Giant squaring off in part three of a trilogy of televised matches from Wrestlemania III and The Main Event—still, to this date, the most-watched televised wrestling event in the history of television. As a bonus, Hulk vs. Andre was a part of a tournament to crown a new WWF Champion. Due to Andre’s controversial victory on the February 5th premiere of The Main Event, the title was held up by “WWF President” Jack Tunney. “Macho Man” Randy Savage—with help from Hulk Hogan—won the WWF Championship that night.

As a kid, when I rented the double-tape Coliseum Home Video release, I could’ve cared less about the tournament. I wanted to see Ultimate Warrior’s pay per view debut versus Hercules. I first saw Mania IV some time in 1990 amid my Ultimate Warrior craze. I didn’t have any match results back then, so, I didn’t know who won the match. You can imagine my delight when Warrior raised his shoulder after Hercules attempted to pin him with a bridge after a back suplex. The match didn’t last five minutes, but following the attack by Hercules following his loss, I discovered the feud was far from over.

I didn’t realize until recently how long Warrior and Herc battled around the loop. I can’t state this enough: on paper, the match-up was a must-see. Then we saw it. Pretty amazing they kept this up heading into the summer of 1988.

NEXT WEEK: Warrior continues to flesh out his history. Have you people ever wondered about the difference between normal and abnormal? I’ll do my best to explain through Warrior’s words. The feud with Hercules concludes.

OH! By the way, I’ve recently chatted with a person whom you all should know by now. “The Ultimate Callab-o” may be right around the corner!

Matt de Simone is a writer, podcast host, and procurer of pop culture. Follow him on Twitter, Instagram, and check out a few “back issues” of his soon-to-be-returning podcast! Have any questions about the Warrior? Hit him up.