Like Casey Kasem used to say, “Now let’s get on with the countdown.”

20. “Sure Know Something” – MTV Unplugged

In 1995, KISS’ MTV Unplugged proved one thing the television special advertised, KISS was back (again). When the band busted into “Sure Know Something” for the live taping, you can tell that was the moment the crowd in attendance knew it too. This performance is arguably the best from this session. Another interesting caveat is the KISS line-up at the time, which featured Bruce Kulick on lead guitar and Eric Singer on drums. During a self-promoted, national “KISS Konvention” tour throughout 1995, KISS played an acoustic set which featured “Sure Know Something”—a song KISS, at the time, hadn’t performed live in years, if not ever. The convention tour also featured an appearance from Peter Criss, who performed “Hard Luck Woman” and “Nothin’ to Lose” with the band during a stop in California. That led to Peter and Ace Frehley rejoining for Unplugged, and then that led to the Reunion Tour the following year. KISS sounds great throughout Unplugged. Most bands with the chance to record a special for MTV Unplugged usually did. Not like that’s a thing anymore. Songs like “Comin’ Home” and “Nothin’ to Lose” really come through as strong pieces of music tailor-made for a stripped-down recording. However, “Sure Know Something” rises above them all. I’m a big fan of Kulick’s guitar tone. Roundback acoustic/electric guitars always sound sweet.

The original recording of “Sure Know Something” appears on Dynasty, which was ironically billed as “The Return of KISS” in 1979. The two-year gap between Love Gun and Dynasty was the longest KISS went without releasing an album. (I don’t count the four solo records from 1978.) The music video is probably one of my favorites KISS produced. It was featured as the second video shown during X-Treme Close-Up and my first look into Dynasty/Unmasked–era KISS. I’m not a huge fan of the band’s attire during the era, but I always thought Ace’s was the best. He looked like a comic book character, so, he scores points. I’ve never seen a ruffled cape on anyone since.

Speaking of Dynasty, here’s a doozy. About 25 years ago, Prince recorded a song titled “Cream” that’s about Prince looking at himself in the mirror and reminding himself that “everything you do is success.” Number nineteen on the countdown consists of Gene Simmons constantly asking his latest sexual partner what it is about his charisma that turns her on. Whether Simmons wants her to know or not, he seems to be unsure.

Best quote (of so many): “Is it my fire or my flame?/Do I drive you insane? (Charisma!)

This song was one of the few that rang true for one of my best friends I tried to feed KISS. He thought it was ridiculous, as did I. You have to think, “What kind of a dickhead would write song about this?”

Gene Simmons, that’s who. It’s unlikely the writers of misogynistic song lyrics were not considered a bit dickish throughout history? It takes balls, especially these days.

All of the cuts off Dynasty sound awesome through a good set of headphones or stereo speakers. This album and Creatures of the Night stand out as the first two KISS albums I listened to on a stereo system and got blown away by the sound quality. The claps synced with the “Ha!” during the verse of “Charisma” is a solid touch. Effects I need too muuuuuch. (Charisma!)

I highly suggest checking out Pod of Thunder‘s episodes analyzing “Charisma” and the next deep cut. It took the guys five episodes to come to their conclusions—for two songs.

Sure-fire contender for the greatest deep cut of the entire KISS catalog. When I first listened to Love Gun in its entirety, “Got Love for Sale” stood out. I didn’t really know what the song was about but the jam rocked it the right way for me. Upon further examination, Gene Simmons once again produces lyrics that only he can provide. I feel like this cut is Gene’s “Do You Love Me?” He’s basically saying, “Hey lady, I know you have pictures of me hanging on every wall. Did you know that my ‘love’ is for sale, though? Not in a gigolo sense, but in a ‘buy our merch and you can possibly get laid’ sense.” I think that’s the “fee” (or “fame”) Gene mentions in my favorite quote.

Best quote: “You buy the magazine, in between the lines/You see my face, you read my name/And you can have me for one price, baby/You must have heard of my fee (or fame—this is highly disputed lyric)”

Peter Criss once again drives the rhythm home as his snare fills maintain the chain, so to speak. Ace Frehley is yet again the unsung hero with a dope-ass solo. This is definitely something the band should’ve kept around in the catalog, or, maybe not. They really didn’t mess with “Charisma” either.

If I would’ve compiled this countdown 20 years ago, “Got Love for Sale” may have appeared in the top ten. I wish they played this live—especially during the Love Gun era. The album features a few dynamite deep cuts which never really saw the light of day when KISS toured the world in their heyday. It’s quite a shame too because this song, as well as “Almost Human,” deserved more play. 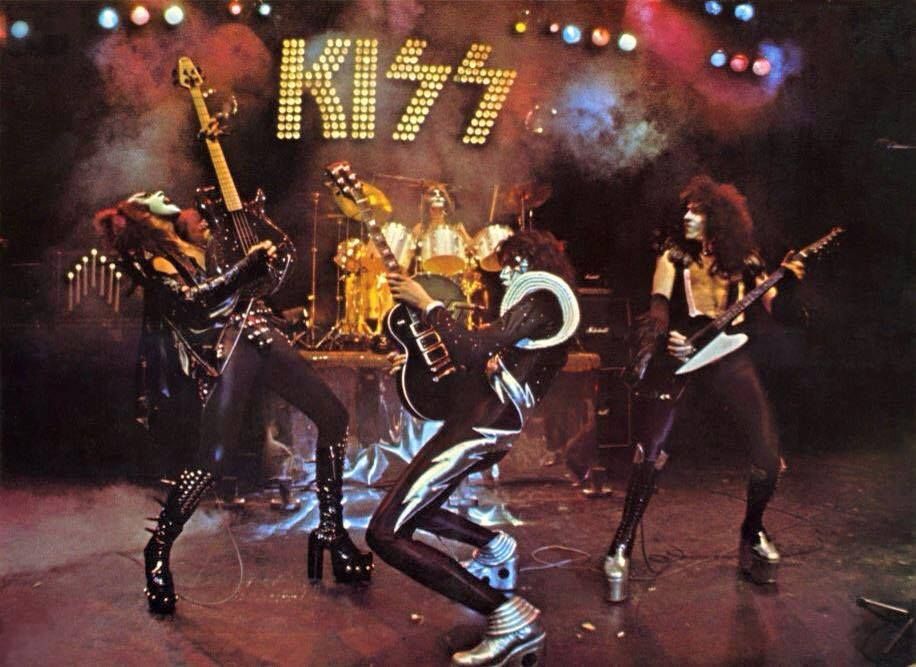 As a KISS fan, I totally respect the studio cuts from the first three albums. That said, once my ears heard the choice selections from Alive!, it was difficult to go back to the studio recordings and get the same feeling. A lot has been said about KISS’ first live album not necessarily being a true-to-form “live album.” It’s a part of the mystique of rock music history similar to the mystique of pro-wrestling history where it appears what you’re watching is a “real” fight between hulked up dudes and dudettes wearing flashy costumes. I’m not sure what few rock albums were recorded directly from a live set—unless you’re a band like Phish, but that’s a whole other conversation for another time.

KISS’ career-saving live album is infamously criticized as not being completely “live.” When I first heard that the album was touched up in-studio, I was shocked. I couldn’t understand why a band needed to go into a studio to “fix” mistakes from a live set. Isn’t that part of the raw feel of hearing a band live? (And then I heard raw recordings and was like, “Oh.”) Anyway, all that stuff aside, Alive! is still legendary and, technically, KISS’ best album they ever produced, live or not. I bought this album one summer while staying with my Nana in the suburbs of Philadelphia. I walked several miles down to a used record store and pretty much knocked out what I still needed from the pre-Alive! II era—the self-titled debut, Hotter Than Hell, Rock and Roll Over and Alive!

In part one of back-to-back Alive! selections on the countdown, “100,000 Years” was my introduction to what a Peter Criss drum solo sounded like in-concert. That’s what really sells the song for me. Well, that and Paul Stanley asking the crowd if they like to party, “Clap yo’ hay-unds… Do you feel right?” etc. The studio cut is solid, but the live version is a total banger. The song builds and builds into a crescendo highlighted by another fantastic and memorable Ace solo followed by Criss taking us all for a walk through his drum jungle. Paul then takes the crowd back to the verse only to revert back to another bridge/solo. It’s a legendary track in all “KISStory”—deserving of mention in any KISS “Top XX” countdown or any “Top Live Rock Songs” list, for that matter.

This is another cut that leaves a lot to the imagination of an early teen. A song about a woman, perhaps a streetwalker, roaming around the boulevard because she’s the best at whatever she does. I’ve always thought “She” is about a vampire on the femme fatale tip. At first glance, the lyrical layout appears Punk-ish. There are only eight bars of verses and a simple chorus. On the musical side, however, the band totally brings the heat instrumentally.

I first heard “She” on Kiss My Ass: Classic KISS Regrooved—oddly enough, the first KISS material I owned on cassette tape. The album was a “tribute” album produced by KISS where they lined up several popular acts from all walks in 1994. Anthrax (2.0) covered “She” and incorporated KISS’ “signature” riff smack dab in the middle of the cut. This cover made me an instant Anthrax fan. A short time after I bought the KISS tribute tape, I (or, Mom) picked up Sound of White Noise later in the year just because it was the most recent Anthrax album.

They produced their own tribute album. That’s KISS.

Dressed to Kill was the first KISS CD I owned. My mom bought it for me by way of the Easter Bunny when I was 14. (I understood the score, but Mom still hooked it up.) I remember hearing the Alive! version of “Rock and Roll All Night” and I assumed that the studio album contained the same recording. It doesn’t. At first, I was a little disappointed but the rest of the album contains so many classics.

Another selling point was that Dressed to Kill features the studio recording of “She.” The only thing that tainted my first go-around was the absence of KISS’ “signature” that Anthrax tacked onto the end of their version. I thought, “Man, Anthrax really tied it together with the jam that I love so much. Why didn’t KISS record it that way? Why did Anthrax?”

My answers came soon enough the next year when I finally got ahold of Alive! The live cut of “She” is balls-out, “We’re here to kick your ass”-awesome. The best part, for me, was discovering KISS added their signature groove at the end of the song (which leads into Ace’s condensed, trademark solo’s conclusion).

“Ah-ha! That’s where Anthrax got the idea.” Mystery solved.

The “signature” I keep mentioning is my favorite “thing” about KISS. They were the first band I knew of that had an instrumental jam that was never its own song—but it totally could be. KISS features a visual experience to this piece of music from “Winterland ‘75” on X-Treme Close-Up. My jaw dropped the first time I saw the old, black and white footage. It’s powerful and gives the viewer an idea that KISS was about to explode. Not just on a national level—globally. All that said, the signature groove didn’t first appear on Alive! In 1995, I had to know if it was ever recorded in-studio. I got my answer soon enough, which will play into the countdown in a couple weeks. Foreshadowing.

Next week, I finally finish up with Alive! only to obsess over another KISS album… without makeup.

Matt de Simone is a writer, comic book collector, former pro-wrestler, and huge fan of KISS. Follow him on Twitter, Instagram, and check out a few episodes of his soon-to-be-returning podcast.